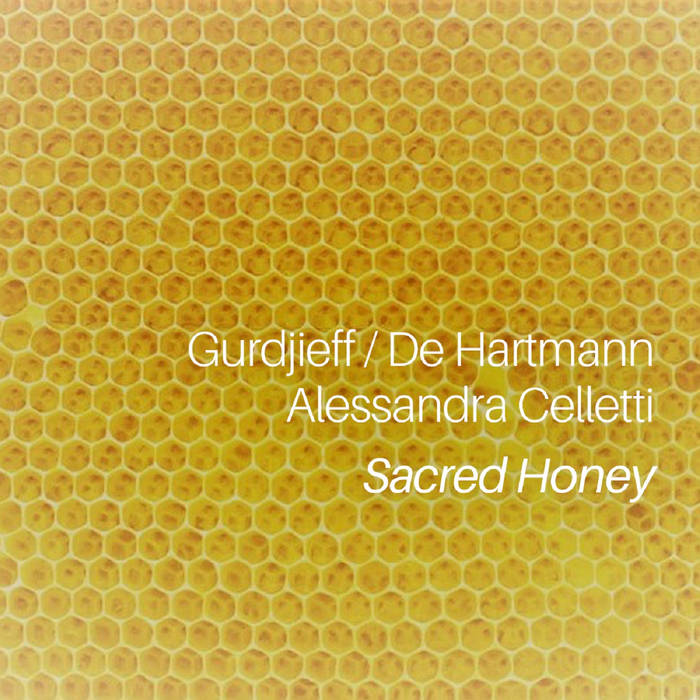 More than 20 years have passed since the release of "Hidden Sources", the first album that I dedicated to the music of Gurdjieff and De Hartmann. Yet, after so many years, I still remember the emotions I felt in the daily immersion in the study of such intense and profound melodies.
At that time I was living in Prague and the mysterious and hypnotic landscapes of Central Asia evoked by these compositions, mingled with the snow and the bitter cold of the Bohemian capital. It was a strange alchemy.
So this year, after a long time, I thought of going back into the sacred atmospheres that Gurdjieff managed to explore during his countless journeys and brought to light thanks to the collaboration with De Hartmann.
This time, however, my piano is not alone. For "Sacred Honey" I tried to imagine and recreate the exotic and esoteric sounds of the movements, hymns and sacred dances of Gurdjieff and I involved the multi-instrumentalist Daniele Ercoli who honored me with his participation with the sound of the double bass, the kaval and of the flugelhorn. In many of the compositions I created the electronic sounds myself and played the harmonium (an instrument very dear to Gurdjieff), that I bought in a small shop in Mumbai during one of my concerts in India.
I would like this new work to have the strength to transport into soundscapes full of charm and enchantment.
on the title: why Sacred Honey?
The word Sarmoung means "bee" and there are traces of a Confraternity of Sarmoung whose origins are lost in the mists of time; signs are found in Babylon since the days of Hammurabi. The Sarmoung taught that objective knowledge is a material substance that can be harvested and stored like honey. It is believed that the Sarmounis (the bees) possessed teachings antecedent to The Flood. Once again comes the metaphor of the Ark and although it is certainly possible that no real universal flood has ever occurred, it is probable that the Sarmoungs referred to their responsibility to keep safe the Ark of ancient wisdom through the floods of time. It seems that this confraternity had recorded the destructions and periodic rebirths of humanity believing that its tradition represented an eternal and unchanging nucleus of wisdom to which humanity could always draw. At critical moments in history, the Sarmoungs distributed their "honey" throughout the world through duly trained agents. The traveler, scholar of metaphysics and of ancient religions John Bennett, believed that the symbol of the enneagram at the base of Gurdjieff's teaching, as well as the knowledge of the Law of Seven, the law which according to the mystical Armenian, regulates every process of change and many of his sacred dances, had arisen from the Sarmoung Brotherhood. [*]
From this suggestion the choice of the title for the sound itinerary within the musical world of Gurdjieff and De Hartmann. The inspiration also evokes a question of absolute topicality and importance on which I was interested to dwell: "If the bee disappeared from the earth, humanity would remain four years of life, no more bees, no more pollination, no more plants, no more animals, no more human beings. " (Albert Einstein?).

Alessandra Celletti comes from a purely classical background, but her musical and artistic experiences multiply with sudden deviations in a very personal music world; away from labels, difficult to categorize in existing cliché, her unique and irreplaceable center of gravity is the piano. ... more

Bandcamp Daily  your guide to the world of Bandcamp

Featuring interviews with the mighty Haitus Kaiyote and genre-busting L'Rain.